All Catholic primary schools in the Sutherland Shire formed a competition in 1963. At the instigation of Sister Dominic (the principal), St Joseph’s formed two teams, one 5th grade, the other 6th, and entered the competition. The inaugural coaches were the energetic Pat Strong and a dedicated teacher, Cecelia Latta. In 1964 Jackie Parker took a team of 5th grade girls to join the Sutherland Shire Netball Association (SSNA), then called “Ladies Basketball”. An early newsletter captured some of the emotion of the time;

“At the end of the first term when the girls heard the news that they were to play competition basketball (netball), they were very enthusiastic. That enthusiasm remained throughout the season, not only with the girls who played regularly but also with those who played in the school colour competition.” 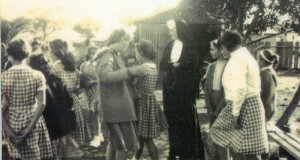 Joeys were the only club without a home ground or facilities to practice on, and would instead practice in parks or wherever a bit of flat ground was available. The Green Point Netball Club also came to the rescue, and let their courts be used after school for coaching. It should be remembered that this was the early 1960’s, and competitive sport for girls was virtually non existent. On school sports afternoons boys would play their team sports, but girls would just all be gathered together at a local park to throw a ball around. But the 1960’s were also a marvellous pioneering time, and the demand for girls to play in competition netball was immense. House parties supplied the money for the netballs, and maroon material. Enthusiastic sewing bees were called and anyone that had an old “Singer” came and helped to make our first three-box pleat tunics. Volunteers also attacked and levelled the claypan between the church and school, and built goal posts that made training bearable. From the making of our own playing courts through to uniforms, this pioneering spirit was captured in an early newsletter reviewing the first season;

“It is a credit to the girls that their standard of play is high, considering the fact – that apart from three or four practices over the break between terms – the girls knew nothing about the game. Comparing also our basketball (netball) court to those in other schools, I think they should be double commended. At this point I wish to extend the thanks of the girls and myself to the men of the Sports Club who erected the basketball posts. I also wish the thank Mrs. Strong for her invaluable assistance. Without it the girls would never have gained such a good understanding of the rules of the game.” 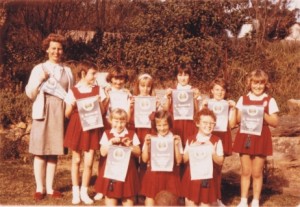 Rita Zuman with 1968 u10 Grand Finalists

The team was so successful, and the grounds at Seymour Shaw more convenient, that the club pulled all other teams out of the school competition and all teams joined the SSNA competition. Pat Strong was the first president, Jackie Parker the secretary, and Ralph Hill and Jackie Parker being the first delegates to the SSNA. At this time, the netball teams became part of a larger “St Josephs Sports Club”, which fielded teams in Netball, Cricket and Rugby League. Each sport was managed by its own sub committee. The netball side, however, was relatively small as girls would join the MIC team (now St Pats) upon going to high school, so that the club never had netball teams above the 12 year age group. By 1968, eight netball teams were fielded with Jackie Parker still as secretary of the club.

Judy Urquhart was secretary for many years through the seventies, and through to the early eighties, the club was extremely successful. It had an A grade team in every age group it fielded, and won numerous premierships. One in particular was a team that State Age netballer Elizabeth O’Mara played in which won from the 8’s through to the 11’s undefeated. The club is extremely proud of our representative players from these times: Elizabeth O’Mara, Stephanie Arden, Alexandra Pocock, Megan and Angela Quinn, Julie Burton, Lisa Tierney and the four Urquhart sisters Lyn, Karen, Liz and Jenny, of which Karen, Liz and Jenny went onto represent NSW at State Level.

By the Nineties, the netball side of the combined Sports Club had stagnated and needed to grow. Girls were encouraged to stay with Joeys once joining high school, as there were still no teams in the 13+ age group. For various reasons the netball teams broke away from the combined Sports club in 1996 and formed their own independent club. It has not looked back since then. The number of teams has steadily grown, and teams are now fielded in all age groups.

The club grew through the early 2000’s and Karen Tozer became secretary in 2005 and a major driving force for the club. By 2010 the number of teams fielded had doubled. By 2012, again we had A grade teams in every age group up to the 18’s, and the club was again winning numerous premierships. We now have new representative players to be proud of and who add to our history.

Today, Joeys Netball Club has expanded beyond the school playground and welcomes members from many surrounding suburbs including Jannali, Kareela, Bonnet Bay, Oyster Bay, Como, Sutherland, Kirrawee, Menai, Barden Ridge, Gymea, Loftus, Sylvania, Woronora, Yowie Bay, Grays Point and Lugarno. The club has grown to 30 teams in 2016 catering for both junior and senior players of all abilities and continues to nurture players at representative levels.

The Joeys Netball community are grateful for those who have given up their time in the past by working tirelessly to make our club what it is today and ensuring that our future generations will benefit from those who have done the hard yards. We are also proud to have been part of legacy in promoting competitive sports for girls from the pioneering early days of the 1960’s.