Our aim at Joeys is to promote the sport of netball within the community, and your sponsorship will help us grow. In particular, we would like to subsidise the cost for younger players up to the age of 10 to help encourage sport in this critical age group. We also want to help improve our coaching by subsidising the cost of training our volunteers.

The club is part of the Sutherland Shire Netball Association. The club has been successful over the years with many grand final wins and a strong presence of our club players moving into development squads, association representative level and even Premier League.

Joeys is an accredited NetSetGo Centre. Sanctioned by Netball NSW we offer a dedicated skills program to players in kindergarten, right through to Under 9s at Seymour Shaw. Players then transition to Bellingara Netball Courts which host approximately 450 teams every Saturday in competition time, which runs from March to September each year. 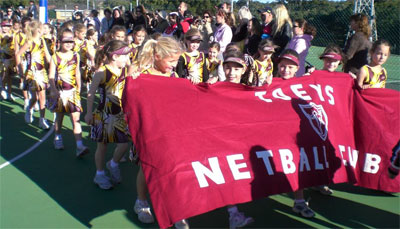 The benefit of being a sponsor is the fantastic exposure to all of our Joeys players, who are drawn predominantly – but not exclusively – from Sutherland, Kirrawee, Jannali, Oyster Bay, Como, Bonnet Bay, and Kareela areas. But more than that you also have the player’s families and support networks who follow us on the courts and on social media. In addition to our club, sponsors are visible to players and supporters from other clubs on a weekly basis.

We welcome your inquiries.

Joeys and the Sutherland Shire Netball Association have several fundraising initiatives throughout the season to raise money for worthy causes such as Crazy Hair and Sock Day for the Kids Cancer Project, Beanies for Brain Cancer supporting the Mark Hughes Foundation, and our own Mother’s Day Flowers initiative where Joeys sells flowers and donates all the funds to Breast Cancer research.

Where you can, we encourage you to get involved.